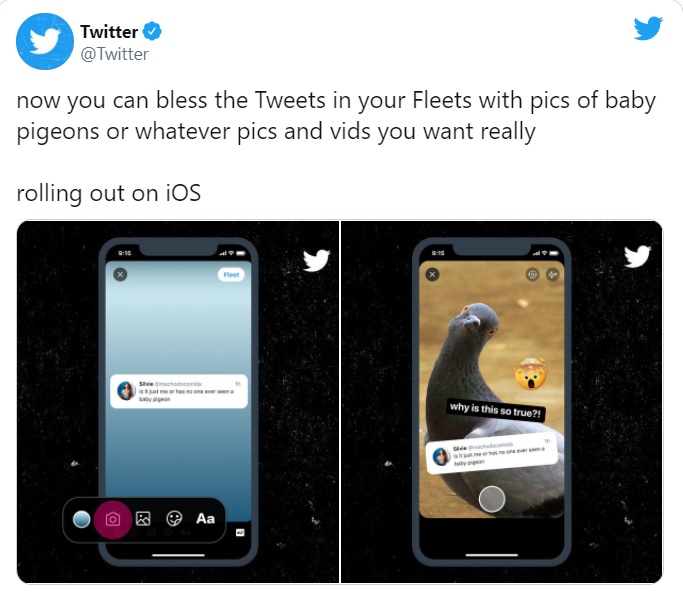 Twitter users can now add background images or videos to Fleets. Twitter announced the new update is rolling out on iOS. There’s no word on when it will be available to Android users. The new feature will give Twitter users more options to customize their Fleets which currently doesn’t have much editing tools as its rivals.

It looks like Twitter is getting serious about Fleets and giving users more options to customize their tweets.

Twitter has added a new Fleet option that enables users to add a background video or image to their Fleet frames, via their device camera or Camera Roll, which significantly expands your visual communications options.

Twitter is offering animated stickers, emoji which it’s calling Twemoji, and GIFs that users can add to their Fleets. The new feature can be accessed by tapping on the smiley face icon at the bottom row of the Fleet’s screen. Here, users will find a series of stickers and emojis that they can choose from and add to their Fleets. There’s also a search bar on top where users can type keywords to look for specific stickers and emojis. This also pulls up the GIF library which is sourced from Tenor and Giphy.

Twitter last month also added the option to disable replies to Fleets. Reactions and replies to Fleets show up in DMs, and users now have the option of disabling this in case they don’t want it. Twitter is expected to roll out more features for Fleets in the future. Hopefully, we’ll see even more Fleets tools coming soon, maybe even more advanced, AR tools or features that will really spark engagement and sharing from the tool.