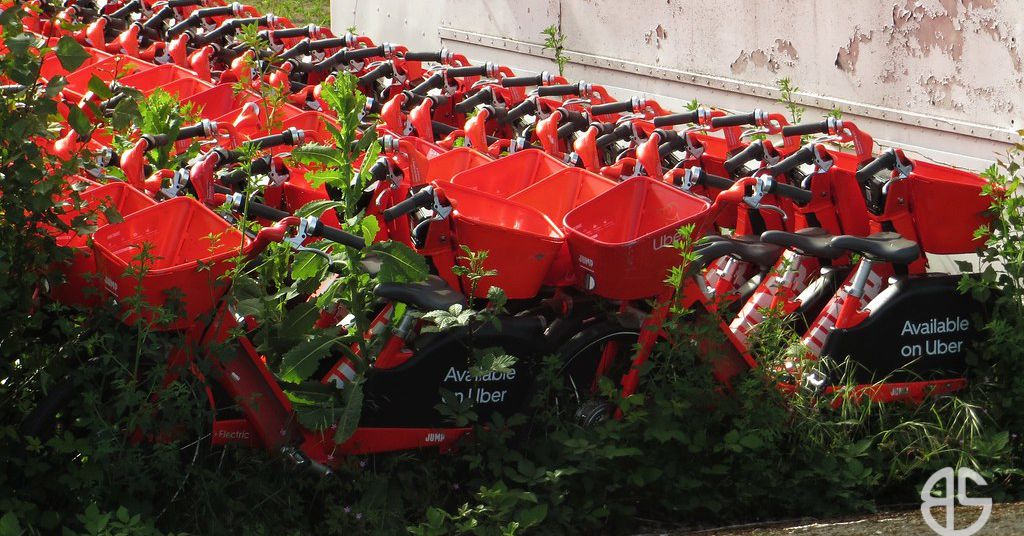 Uber is sending tens of thousands of its electric Jump bikes to the scrap yard, weeks after offloading the money-losing bike-share division on Lime. The news of the scrapped bikes has incensed bike enthusiasts on social media, one of whom decried the act as “unconscionable.”

Uber confirmed in a statement that it was “recycling” many of Jump’s older bikes and scooters after transferring “tens of thousands” of the newer models to Lime. But the scrap job comes at a time when many people are avoiding public transportation because of the coronavirus pandemic and looking for alternate forms of transportation. Bike sales (and especially electric bike sales) are booming. And the destruction of tens of thousands of viable bikes and scooters during a crisis is striking many on social media as incredibly wasteful.

“I can’t tell whether it’s misinformed, or whether it’s calculated and cynical,” a former Jump employee said. “But it’s just affecting everyone the wrong way.”

Photos of thousands of Jump bikes destined for the scrap heap first surfaced on the Bike Share Museum website, a digital repository for shared bikes that have since been retired. Founder Kurt Kaminer said that after he wrote a story about Lime possibly retiring the bright red bikes, numerous former Jump employees reached out to him with news of the scrapping effort. He said that between 20,000 to 30,000 bikes were being discarded.

“The Jump bike was really, really very special,” Kaminer, who’s based in Miami, told The Verge. “I know it’s heavy and such, but I don’t know, it just has this look and feel. It just spoke to me.”

EXCLUSIVE: New, close-up pictures of the Seattle JUMP 5.5 fleet show that every single bike has *already had their 36V Li-Ion battery removed,* so the manpower existed to do that prior to sending them to scrap. The extent of the waste is unfathomable. pic.twitter.com/zT3nRhYNAs

There have been many iterations of the Jump bike, but the ones that are being scrapped are the “5.5” version, Kaminer said. There are also the more advanced 5.8 versions that have been given to Lime to develop, though Lime lacks the technical expertise to do so because Uber fired the tech team at Jump, according to Kaminer. The ex-Jump employee who spoke to The Verge confirmed this. In addition to the tech team, Uber also fired the robotics team at Jump that was working on semiautonomous scooters and other smart mobility functions.

Kaminer said he was “disappointed” that Uber chose to destroy the bikes rather than repurpose them, but he also understands that it was inevitable given the nature of the deal Uber made with Lime. “It’s a business,” he said.

In his article, Kaminer also said the destruction of so many bikes was “disgusting,” especially “in the midst of an unprecedented pandemic where bicycles have literally become an object of survival. Heavy as they are, these could be transportation for the many who have been brought to financial ruin during COVID-19.” The US is facing “a severe bike shortage” due to the disruption to the global supply chain caused by the coronavirus pandemic, The New York Times recently reported.

Uber acquired Jump for $200 million in 2018 with the goal of using the bike-share system to become a one-stop shop for urban mobility. At the time of the acquisition, Jump had 12,000 bikes in 40 cities and six countries. But Jump was also a money loser, even more so than Uber’s core ride-hailing business. Several top executives have left the company’s new mobility division in recent months, including head of new mobility Rachel Holt and Jump founder and former CEO Ryan Rzepecki.

In addition to offloading Jump on Lime, Uber led a $170 million investment round in the beleaguered Lime that dropped the scooter startup’s valuation by nearly 80 percent. Most of Jump’s 400-plus employees were laid off as a result of the deal. Jump’s permit to operate bike-sharing in San Francisco expired May 26th, though Lime recently announced it would be returning Jump’s bikes to Denver.

Kaminer wasn’t the only one to obtain evidence of the massive scrapping effort. Cris Moffitt, an entrepreneur and lifestyle designer, posted a video that he received from a friend who works in a scrap yard in North Carolina, in which thousands of Jump bikes and scooters can be seen strewn across the yard. In several clips, a large crane scoops up dozens of vehicles and deposits them in a dump truck.

“I just felt like it was a very unfortunate outcome and maybe I could get it some exposure on Twitter to pressure them to do something better,” Moffitt told The Verge.

Sanjay Dastoor, co-founder and CEO of scooter startup Skip, said that the Jump bikes “were the best shared ebikes ever designed,” and described the scrapping videos as “tough” to watch.

In a statement, Lime said that it took possession of “tens of thousands of e-bikes,” including some spare parts and tools, as part of its deal with Uber. “We have not recycled any of the JUMP e-bikes in our fleet and are committed to scaling and operating them during this critical time,” Lime spokesman Russell Murphy said. “Once the transaction officially closes, we plan to work with Uber to find sustainable ways to donate and re-use any remaining ebikes in their inventory.”

“we decided the best approach was to responsibly recycle them”

As to the scrapping effort, Lime deferred comment to Uber. A spokesperson for the ride-hailing company said it had explored donating the remaining, older-model bikes, “but given many significant issues—including maintenance, liability, safety concerns, and a lack of consumer-grade charging equipment — we decided the best approach was to responsibly recycle them.”

An Uber spokesperson said that it would be difficult to donate Jump’s bikes and scooters en masse to any organization because many of the parts and components are proprietary and require specialized technicians to maintain. But the ex-Jump employee said the company was being short-sighted.

“The trust has been damaged with a lot of the cities,” the ex-employee said. Many cities had designated Jump’s bike and scooter sharing services as essential modes of transportation during the COVID-19 lockdown, but now very few vehicles remain after Uber’s deal with Lime. This will damage the trust that cities put in these companies going forward, the employee said, adding, “It’s sad.”