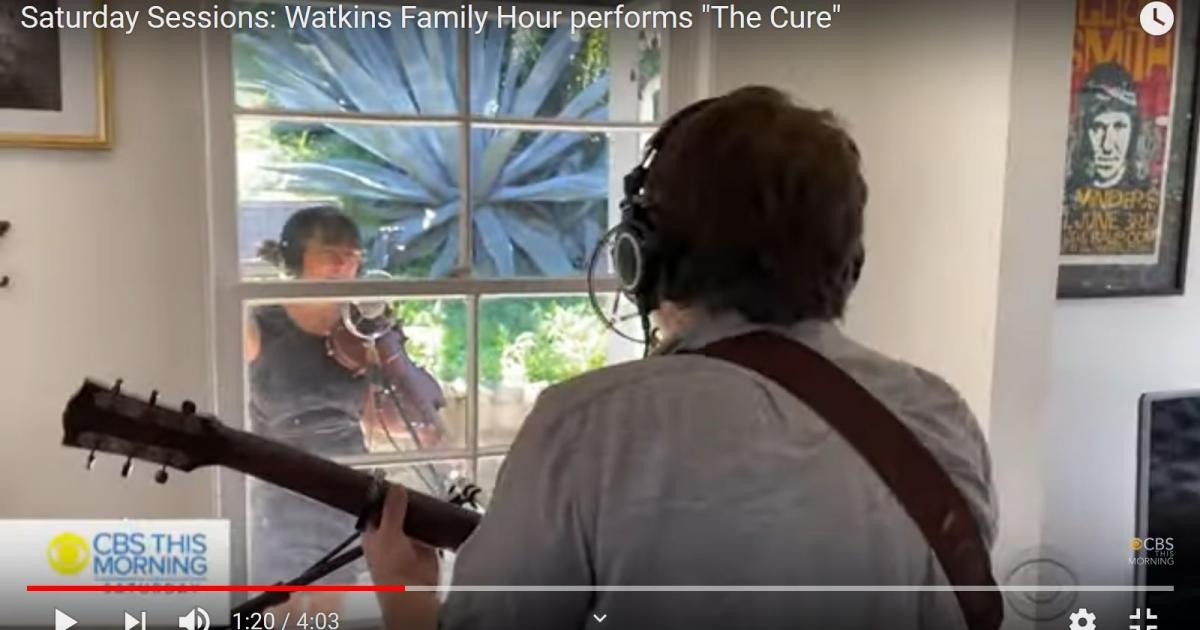 Watkins Family Hour understands the indescribable comfort and fallow creative ground fostered by the warm sun and well-loved strings. Sara and Sean Watkins have been collaborative partners as long as they can remember under those conditions. The only difference now is that the siblings have to model proper social-distancing protocol when playing, so this morning, on the May 16 edition of “Saturday Sessions” on “CBS This Morning,” Sara Watkins played her fiddle on the sunny porch while Sean played guitar from the living room.

The brother and sister stood face-to-face rather than side by side, but the collective harmonies have never sounded sweeter or more nurturing than in these self-quarantined times.

The three songs were a welcome respite of realness and heart amid the horrors of the coronavirus siege. Music is always a salve for the aching soul, and the birthright harmonies and impeccable musicianship shared by Sara and Sean Watkins are rare gifts in any era.

Bluegrass, roots music, Americana, and Country Music (by whatever moniker preferred) derive from a rich tradition of family, whether by blood or common music bonds. As Ken Burns so exquisitely depicted in his “Country Music” documentary series, the entire genres of country music or Americana would never have come into being without The Carter Family.

Nickel Creek came to be in 1989, and for many young listeners, the band’s 2000 self-titled album was the first bluegrass/Americana album that broke into their consciousness. Sara and Sean Watkins and mandolin wizard, Chris Thile comprised that ensemble, and Allison Krauss produced that ambitious album that announced Americana to a new audience.

Nickel Creek garnered Grammy honors for Best Contemporary Folk Album for “This Side” in 2003 and in 2015, earned another Grammy for Best American Roots Performance for “Destination.” Numerous CMA, ACM, and other Grammy nominations came for the band.

What began as Sara and Sean Watkins in 2002, joining friends that the LA nightclub, Largo, evolved into an album with some stellar friendship support for the string maestro siblings. Fiona Apple, Taylor Goldsmith, Mandy Moore, Don Heffington, and many more notable artists joined in on the album of covers produced by Sheldon Gomberg. The self-titled album still has a fervent following. Watkins Family Hour takes on everything from “She Thinks I Still Care” to the Grateful Dead’s “Brokedown Palace” with unflinching vigor and bold interpretation.

Musical medicine for the spirit from Watkins Family Hour

Beyond the beauty of the natural sun shining down, the verses and lovely strings on “The Cure” were perfectly prescribed remedies from Watkins Family Hour.

The innate harmonies gifted to siblings are unlike anything that ever can be trained, and the musical interlocking of this brother and sister team is tremendously touching.

“I’ve been looking for a breakthrough/ Long as everything stays the same” the lyrics open. The perky bridges brighten as the song echoes “it’s good, it’s real, is how it’s supposed to feel,” leading to the admonishment that “sometimes you gotta leave town and year zero-sum games and throw everything away.”

Right now, few of us are leaving town, or making faraway new plans. The blessing is that music that is so good and so real can take us on a vacation any time.

Last month, Watkins Family Hour released “Brother Sister,” the duo’s second album. The songs are very intimate, but the sound is very big, far beyond what most two musicians could muster. Mike Viola, known for his production on the breakout album, “Songs of America,” by J.S. Ondara, lent his talents for the sophomore collection.

“Just Another Reason” is a driving acoustic engine of a song, made even more powerful by the perspective of the siblings “playing at one another” between a windowpane. Unity gels in the final close of the chorus.

Morning viewers only got to hear a shade less than 40 seconds of “Miles of Desert Sands,” but thankfully, the entire version is accessible.

The lilting, lyrical ode akin to Irish traditional offerings recounts the struggle of breaking any new ground in life. The song serves as the crowning jewel of the three-song set from the Watkins Family Hour on “Saturday Sessions.” The siblings are hosting virtual musical “get-togethers,” per their website.

Any means to share music makes the world better these days, and Watkins Family Hour will leave listeners wishing for another hour or two. The siblings are even defter at lifting spirits than they are with lifting the tenor of morning TV Shows.