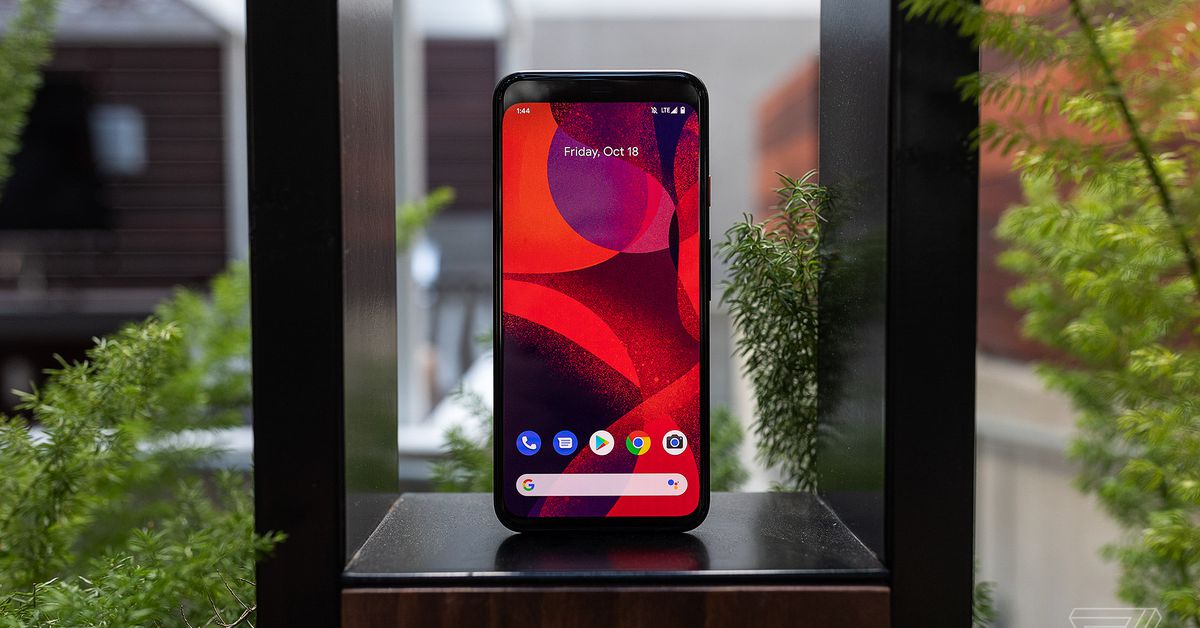 Last week, I wrote about Google’s somewhat confounding hardware strategy in the wake of a report about internal conflict from The Information. But I did something else right after that: I interviewed Google and Alphabet CEO Sundar Pichai on The Vergecast with Nilay Patel.

The whole interview is worth a listen, of course. Pichai is in charge of one of the most important tech companies in the world, and Big Tech has taken on such an outsized role in our lives that it’s only natural that it’s taking on an outsized role in the coronavirus response. We spoke to Pichai about that and also about the recent report about Google’s flagging diversity efforts.

And he definitely made fun of me for being obsessed with RCS Chat before getting into his thinking on Google’s communication apps. So give it a listen; it’s in our feed.

But here in this newsletter, I want to zoom in on Pichai’s responses about Google’s hardware division because I do think they’re illuminating — not in a sharp, spotlight kind of way but in a soft glow on the horizon kind of way. Not to belabor the metaphor, but when it comes to Google’s hardware efforts, there’s a bit of a “darkest before the dawn” vibe.

I asked specifically about the Pixel, but Pichai wanted to put it in a larger context. I’m quoting the beginning of his answer in full here because I think it contains the seeds of the rest of our discussion:

The last couple of years have been a major integration phase for us because we’ve combined our Google hardware efforts with Nest. We absorbed the mobile division of HTC. So it’s been a lot of stitching together. And we have a wide product portfolio, too. So it’s definitely been a building phase. We’re super committed to it for the long run. Hardware is hard. And it definitely has components, which take real time to get it right, thinking about underlying silicon or display or camera or any of those tacks. And so we are definitely investing in it, but that timeline. I think we’ve made a lot of progress.

Pichai’s not wrong that the hardware division under Rick Osterloh has had a lot of corporate distraction. The HTC mobile division was acquired in 2017. Osterloh has said the first phone to fully come out of that division was the Pixel 3A. And Google made the public announcement that it was reabsorbing Nest from Alphabet almost one year ago.

So, fair. There’s been a lot going on. But if there’s a “getting in your own way and squandering an opportunity” example worthy of a canonical Harvard Business Review case, Google’s handling of Nest is it. You would think that a company as big and multifaceted as Google (to say nothing of Alphabet) would be able to walk and chew through an internal merger at the same time.

One of the reasons that it’s been frustrating to watch the Pixel struggle to catch on is that smartphones seem like a solved problem. That’s obviously an oversimplification at best, but companies big and small crank out Android phones at a dizzying pace every year — hell, every week. You’d think Google — Google! — could figure it out.

“Hardware is hard,” Pichai says. It is. And just adding more engineers and resources doesn’t necessarily make it easier. Still, explanation isn’t absolution, and I think Google’s hardware division could have done more over these past few years.

“Some of the deeper efforts we are putting in will take three to four years to actually play out.“

All that history is what it is. What’s most important about the exchange is when Pichai answers the question I posed last week in this newsletter: what is Google hardware for? It turns out that, as with many things in tech, what you think is the obvious answer turns out to be the obvious answer. Or three answers, as it happens. Emphasis mine below:

So for me, three reasons. One is to drive computing forward. The second is we really guide our ecosystem. Pretty much everything we’ve done well, you can go all the way back and Android’s early days, Samsung Galaxy Nexus, which we worked together, was a pivotal phone. Nexus 7 in the tablet world. I can point to Chromebooks — all along, we did our original hardware to kind of bootstrap it. And I look at areas maybe where we haven’t done opinionated [work] — maybe [smart]watch is a good example where we haven’t. And then you can see it’s tough to guide an ecosystem to what your vision of it is, just building the underlying platform.

So I think that’s the second reason. And third is to really build a sustainable hardware business. I think all of it is important, and that’s how I think about it. And I’m excited. Rick [Osterloh] and team, working closely with Hiroshi [Lockheimer] and team, they have that long-term view. So we’re pretty committed to it.

If you’ve been watching Google’s hardware efforts over the years, there is just so much you could unpack here. The admission that Google squandered its first-mover advantage in smartwatches. The fact that the first two reasons are the exact reasons Google created the Nexus program before the hardware division existed. The idea that Google needs to do “opinionated” work (which I’d distinguish from just trying to make the flat-out best thing possible).

Finally, there’s the part of the original quote where Pichai looks ahead, talking about components “which take real time to get it right, thinking about underlying silicon or display or camera or any of those tacks.” Later, he adds: “Because some of the deeper efforts we are putting in will take three to four years to actually play out. And when they come in, I think I’m excited about how they will shape where we are going.”

When I think about investments that “will take three or four years to actually play out,” I wonder what they might be, especially in the phone space. Maybe this is just wishful thinking, but to me, there’s only one Android component that really fits the bill: the processor.

As I said before, Android smartphones are practically a commodity. A big part of the reason for that is so many of them just use Qualcomm’s processors. That means, every year, a lot of Android phones have new capabilities that are defined by whatever Qualcomm’s new chips are capable of.

Google is in the same boat as every other Android manufacturer in that regard. But a custom chip would mean Google could potentially differentiate its products more — not just phones but Chromebooks, too.

Can Google differentiate its phones from every other Qualcomm-based Android phone?

In April, Axios reported on just such a chip codenamed “Whitechapel.” It’s reportedly being manufactured by Samsung and may arrive as soon as next year. Google has demonstrated some capability in chip design before, by the way: it has created machine learning tensor processing units (so-called TPUs) for servers and imaging processing chips for its phones.

Is that what Pichai was hinting at? No idea! But whatever he was referring to, it does seem clear that we are still at least a year (or three or four) away from those investments coming into fruition. In the meanwhile, I think Google is going to need to show a little more momentum.

Google reportedly put out a survey recently that suggested the price of the upcoming Pixel 4A would be $349, undercutting the competition by fifty bucks. It also suggested that this year’s flagship Pixel 5 might not try to compete at the ultra-premium tier (i.e., phones that cost $1,000 or more). Both ideas strike me as smart.

When I asked Pichai how much time he personally spends thinking about hardware, he noted that he had a meeting that morning looking at next year’s hardware portfolio. I jokingly asked him if there was anything he wanted to tell us from that meeting.

He replied, “You guys are going to figure it out anyway.”

News from The Verge

┏ The FBI successfully broke into a gunman’s iPhone, but it’s still very angry at Apple. Apple’s response statement included. It is as cogent and ethically clear as the FBI’s is manipulative and dissembling. (Very, in both cases.)

┏ Disney streaming chief Kevin Mayer resigns to become TikTok CEO. Passed over to become the CEO of Disney, he’s moving on. If you were looking for a sign that TikTok wants to be a little more legit here in the US and tamp down the worries over its Chinese ownership, this one is big and glowing and neon.

┏ Microsoft: we were wrong about open source. I feel like at least half of Microsoft’s last decade has been “Haha whoops! That was dumb and/or mean. Let’s try again to do it right this time.” And it is working.

┏ Logitech’s new Circle View camera comes with built-in privacy controls. It looks nice, and it’s fascinating to see that it ONLY works with HomeKit and therefore Apple products — it even uses iCloud for storing clips. It’s almost like Apple asked Logitech to make a camera it would be comfortable selling in its stores as a privacy-focused option.

Logitech has added a pair of nice privacy features to the camera, too. The first is simple: the camera can be tilted downward to face its base so that you can easily block it from seeing anything. The second addition is a hardware button on the back that lets you shut off the camera and microphone so nothing is being monitored

┏ Microsoft Surface Go 2 review: don’t push it. In case you missed it, my review from last week.

The big question is whether you need this kind of power. An OLED screen, a 45-watt H-series processor, and a cutting-edge GPU are certainly cool things to have. But they also cost a chunk of change, and you’re paying in hours of battery life as well.

Jon Porter reviews TCL’s attempt to get its own brand recognized and sought-after in the US. Despite the company’s long history of making phones, it feels a little bit too much like a first attempt.

More from The Verge

┏ How to buy refurbished gadgets. Great overview from Cameron Faulkner. I fully endorse refurbs so long as you can buy them from a store you can go back to if you have problems. I always look for a refurb option now when I’m buying electronics.

Makes me wonder if this year’s iPhone SE is going to end up feeling like more a misstep than I would have guessed.

┏ How Alphabet’s smart city echoed a failed sci-fi utopia in Minnesota. Adi Robertson’s interview really shows how utopias keep trying to do similar things over and over.

Or the idea of modularity, that’s something people were going crazy for in the ‘60s with megastructures. Eventually MXC was going to have a megastructure where you’d just have a frame for your main structure and you could plug in units based on what you needed, so it would be constantly shifting. I saw similar kinds of language in Google’s proposal as well. So these are relatively old ideas, we just haven’t found a way to actually do them yet.