One more case in the queue, after Epic’s Fortnite, but both are having different scenarios. Now, Apple has a dispute with WordPress!

A founding WordPress developer blamed that until WordPress accepts to gives over 30% of its domain name purchases to Apple, Apple is not updating the app and fix bugs in the App Store. We all know that the WordPress website is free to use, however, there are certain themes that need premium subscription or purchase, otherwise, it’s free.

So, The problem is WordPress lets users create and manage their websites without any cost or in-app purchases. Also, WordPress desktop website sells a domain name, but that’s a completely different scenario.

In a Tweet from WordPress developer Matt Mullenweg stated:

We are locked by Apple’s step and not able to provide relevant service to users. To be able to app updates and bug fixes, we have to adhere to apple’s rules i.e for .com domains, we have to impose in-app purchases. 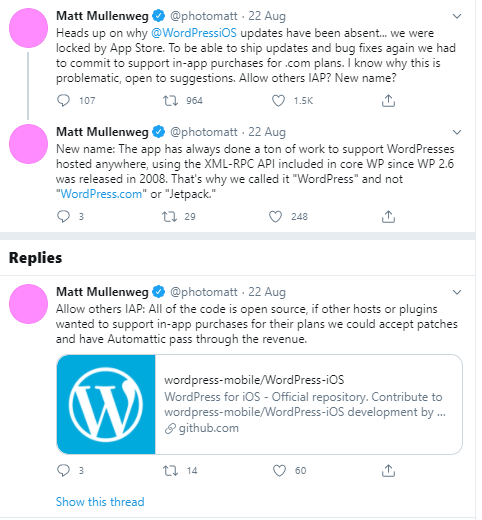 WordPress, both desktop and iOS apps, are owned by their parent company Automattic. The app version is completely free to use. Users do not have any options to buy domain names on the WordPress app. So the question that arises here is: If it’s a free-to-use app, what does Apple want 30% off?

The answer to the above question is tweeted by Ben Thompson, Founder of Stratechery, a tech policy blog. He said Apple’s action “is thus holding millions of websites hostage for 30% of Automattic domain sales.” 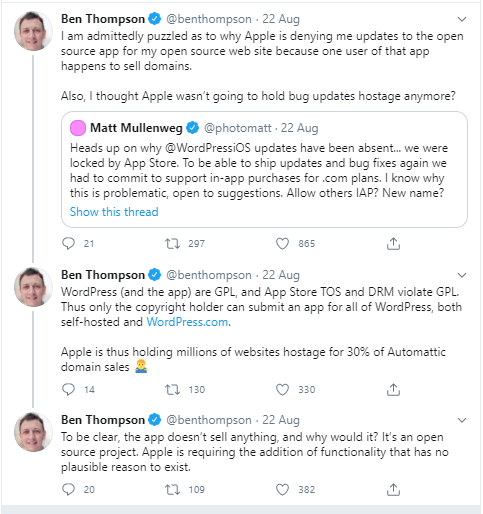 Finally, Apple’s spokesperson said to Digital Trends that the company is currently working with WordPress to bring its app into compliance with App Store requirements and that WordPress’s latest update has been approved.

Last week a dispute over Epic and Apple has come to new and this week WordPress and apple are the headlines.