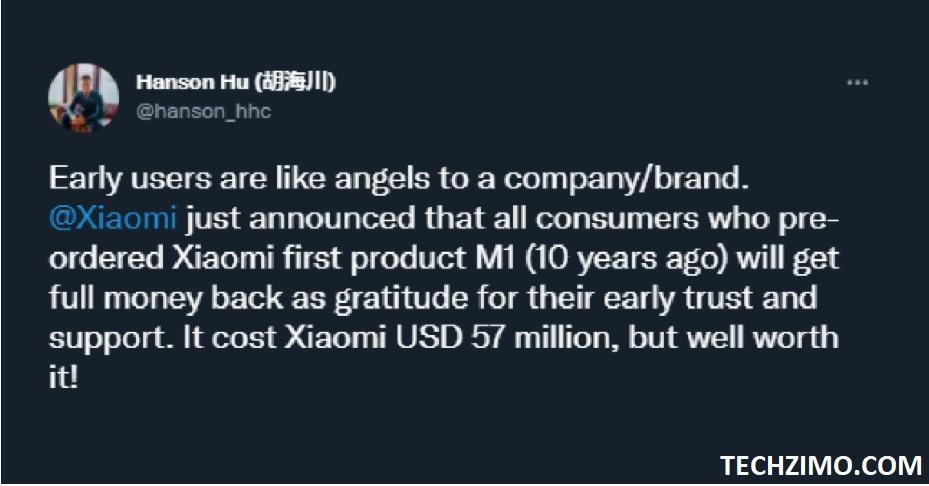 Celebrating the tenth anniversary of its smartphone business, the company has now announced a unique way of sharing joy with its early buyers. Xiaomi announced that all Mi M1 pre-order customers will get their money back. The announcement was made at the Mi Mix 4 launch event.

The Mi 1 was announced in August 2011. The phone had a 4-inch LCD display, 1GB of RAM, a Snapdragon S3 dual-core processor, a single 8MP rear camera, a 2MP front-facing camera, and a plastic body. The cashback will be credited in online store credit in a red envelope rather than hard cash. But at least it shows the company hasn’t forgotten the people who acknowledged and trusted its devices in the early days.

As per Xiaomi, a total of 1,84,600 units were sold initially. The price of the affordable flagship smartphone at the time was Rs 23,000. This means Xiaomi will refund a total of 370 million Yuan, or Rs 424 crore, to mark the occasion. Offering the entire amount of the smartphone as a refund is a very bold move by the company and is sure to go down as one of the best giveaways by a company to show appreciation to early buyers.

“Early users are like angels to a company/brand. @Xiaomi just announced that all consumers who pre-ordered Xiaomi’s first product M1 (10 years ago) will get full money back as gratitude for their early trust and support. It cost Xiaomi USD 57 million, but well worth it!”

A decent mid-range smartphone can be bought within this range, either by Xiaomi or its sub-brand Poco. If not for smartphones, beneficiaries of the refund can also opt for other Xiaomi products including smart home gadgets as well as wearables.

BGMI Independence Day Mahotsav announced: All the rewards that are up for grabs

WhatsApp will let users transfer chat history between iPhone and Android, but there’s a catch

Related Topics:refund to all Mi 1 buyersXiaomi celebrating its 10th anniversary