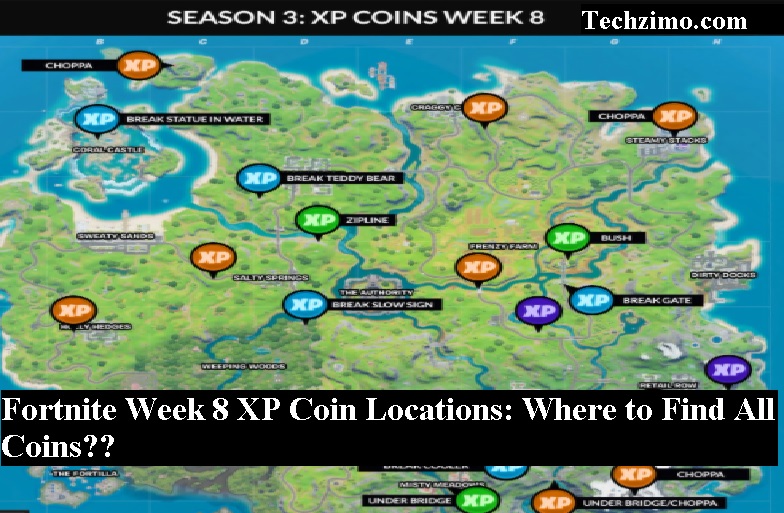 Then you have landed on the right page. Scroll down to know the locations.

Fortnite Season 4 Week 2 Challenges Guide: Rewards, How to and Much More!

Fortnite received its update v14.30 on the 13th of October, along with a new secret challenge called Most Wanted. It provides gamers with a chance to earn an additional 10,000 season XP.

Colorful coins are back in Week 8. There are 10 coins in total. As usual, players have a chance to earn

Players will have to build strong structures while collecting Purple color coins as Purple XP Coins will break into smaller fragments when touched, and fragments will disappear if the player does not collect them fastly.

Blue XP Coins have a timer on them. Each new coin has new inside features around the map that players will need to break with a harvesting tool. Green XP Coins are the most common so they are worth the least.

Gamers can collect all the coins in the same match. Five XP Coins are located between the Fortilla, Misty Meadows, and Slurpy Swamp. Four can also be found around Stark Industries, where players can also drive to collect even more XP at once.

All XP coin locations consisting of four green XP coins, three blue coins, and two purple are present on the map.  All of the coins are located at the Marvel-themed locations. These locations are the Stark Industries, Misty Meadows, and Slurp Swamp, respectively.

The Gold XP coin will be found at Panther’s Prowl, in the tail of the statue.

The blue coins are very delicate to find because they’re enclosed in certain decorative items. You have to break them to earn it.

The first blue coin is placed inside the brown suitcase on the beach south-west of Misty Meadows.

You’ll find the second blue coin in the village lost in the swamps. You’ll find your reward inside the wooden furniture.

The third blue coin will be found by destroying a dumpster.

Fortnite Guide: How to unlock Wolverine skin from the season 4 battle pass

You will find The first purple coin in a tree south of Stark Industries and southeast of The Authority.

You will find the second Purple coin in a grove of trees at the western part of Stark Industries.

You will found the first Green XP coin in the North of the Fortilla on a sign by The second one will be on a lily pad on the river northwest of Slurpy Swamp.

The third one is found in a bathtub at the small lake on the southeast corner of the map.

And the last, fourth one will be found on a hill at Stark Industries by the Upstate New York Landmark.

As Usual, This week, you’ll need to destroy a suitcase, a cupboard, and a trash can to earn extra XP coins.

How to conquer the challenges?

The latest secret quest is an easy one to follow if we go across the map. The gamers have to run for the secret quest and to find all the locations that have the sprays of Gnome. These Sprays are usually found at the Catty Corner. which is situated at the south portion of the island. The other one is located at Slurpy Swamp. And the last one is found at the Coral Castle.

Stay tuned for more such updates !!